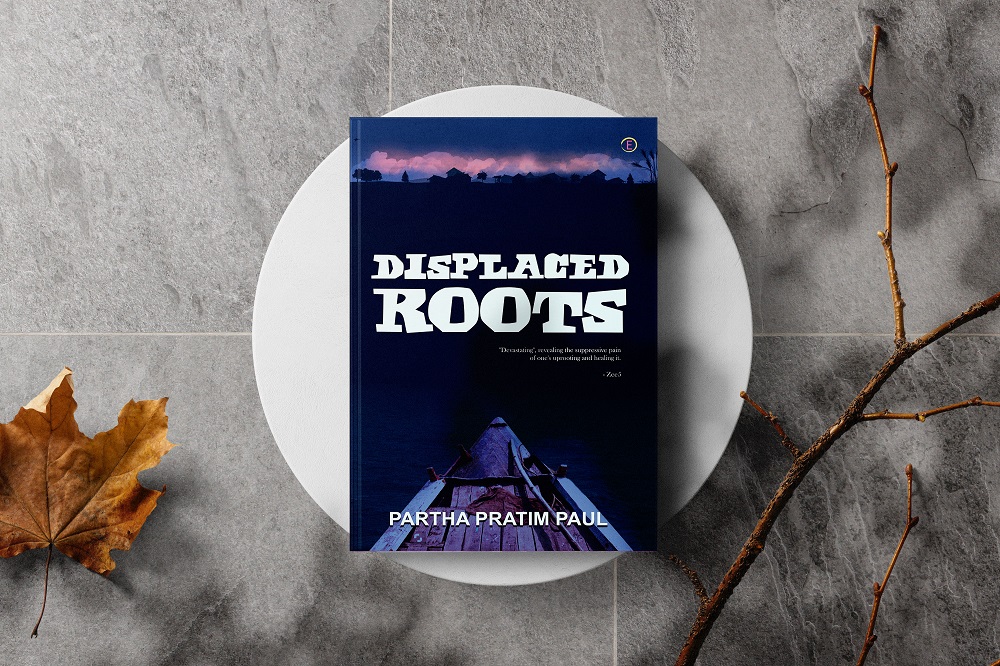 “True courage results in some extraordinary outcomes, something which we hope for deep down in our hearts but don’t really expect in our practical life and yet life surprises us with some beyond imaginable out-turns, only because of our courageous and bold moves!”

Reviewing this daring Historic Fictional book, “Displaced Roots” by Author Partha Pratim Paul has been a very special experience to me. Since, most of us are still not familiar with the painful incidents that took place during the time of independence of India! This amazing novel had thrown some light over the misfortunes of the individuals, which are not recorded in any book of history that took place when the Bengal province got divided.

About the Author: Author, Partha Pratim Paul is an Indian author born in 1978 Kolkata. He grew up in small city and completed his education there up to graduation level. Before pursuing his professional life in Insurance industry in a senior profile, completed MBA in Marketing and International Business. He lived in many places of India in episodes and still moving. So, well able to establish connections and differences of life between a big city and a small town. He is master in analysing of relationships, imagination of thoughts and feelings of persons. This gives him an edge and brings alive of characters in his fiction stories. He makes readers to live in his story with those characters and thought process goes exactly the same what they are thinking. When he doesn’t write novel, he writes poems and songs. Living in Jabalpur, Madhya Pradesh with wife, daughter and along with parents.

Book’s Introduction: This remarkable novel, “Displaced Roots” by Author Partha Pratim Paul comes under the category of ‘Historical Fiction’ genre! The book very delicately presents the readers with an untold tale that took place after the independence of the nation, when a political line was drawn to divide Bengal province. In just an overnight, the earth was changed for people who had been living there from generation to generation. Massive displacement of population started in between two countries and it did not stop even after two decades of independence due to political instability and demographic changes based on the religion line!

The book further introduces the readers with the character known as Narendra, who had lost his mother at so early age that he does not even remember her face. His birthplace fights against their own foreign rulers to protect their language as a birthright and as an identity. It was the only revolution in history, which was based on the language and was known as ‘Bhasha Andolan.’ During those days in 1959 at only age of fifteen years, he was one of those millions and millions of people who got displaced from their roots, as he crossed the border, having no choice other than to leave his homeland and father alone.

Book Title: The title of this book, “Displaced Roots” is indeed catchy one and this is something, which makes the book even more interesting, as the title itself compels you as a reader to pick up this book for a read. You would feel the urge to go inside the chapters and try to understand the Author’s portrayal of the incidents that took place after the division of the Bengal province, at the time of the independence of India!

Well, the Author has completely succeeded in choosing a perfect Book Title for his incredible story and his storyline truly justifies the book title too. Therefore, I must mention that it is a very apt title for a book; belonging to the category of ‘Historical Fiction’ and the Author had been extremely wise to go for this title.

Readers Connect: Well, Author Partha Pratim Paul has very vividly painted the picture of the misfortunes, which the individuals had to face at the time of the independence of our nation. He gives a very clear picture that how innocent people had to pay the price of the division that torn off the nation. The way he had carried out the writing is truly brilliant and this is bound to make the readers feel the pain of his characters in this book. He had made his characters alive through his writings and had wonderfully described those incidents, which shaped up the various characters in this novel.

Another very important aspect of this book is that the narration made by the Author is indeed engrossing & interesting and the language used in this book is so lucid, that it would totally hook the readers until the very last page. Moreover, this is a book, which will make the readers think about the plot for several times, even after completing the book!

Verdict: A Book like “Displaced Roots” is for sure a Must-Read oneand deserves a chance. The way author had penned down these marvellous tales and had highlighted the characters in his stories is undoubtedly fabulous. You seriously do not get to read a book like this every day, these kinds of Novels hits the market only once in a while and Author truly deserves appreciation for his hard work and out of the box thinking.

Moreover, if you are one of those readers, who is looking forward to read a worthy “Historical Fiction” plot to read then this book is probably the most perfect fit for you. Author, Partha Pratim Paulis a promising Author, who is very honest with his writings, which can be felt in his spectacular stories. Readers across the nation will love this book!