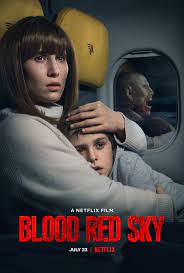 I WON’T THROW IN SALT TO SPOIL YOUR TASTE FOR THE MOVIE.

Blood Red Sky is the fantastic mashup of a vampire on a plane with the terrorist hijacking the plane.    One of the best things about this film is that it has not portrayed Muslims as terrorists like most western films.

With the film, the audience can see the backstory, too, in which the audience will get the exact, accurate storyline of the vampire.

Blood Red Sky also has all kinds of emotional aspects. The connection between mother and son is more than anything. At the end of the movie, there are heart-breaking scenes where one can see maternal love, its sacrifice to what extent it can go.

Blood Red Sky has twisted and Turns throughout the movie, which gets the audience’s attention on the screen until the end.

All the actors had made an excellent performance. But the real star of this film is that child who had played the son’s role (Elias).

The makeup is very realistic and impressive.

If vampires are your thing, you will love this movie if you also love the action!

Overall my rating for this amazing movie is