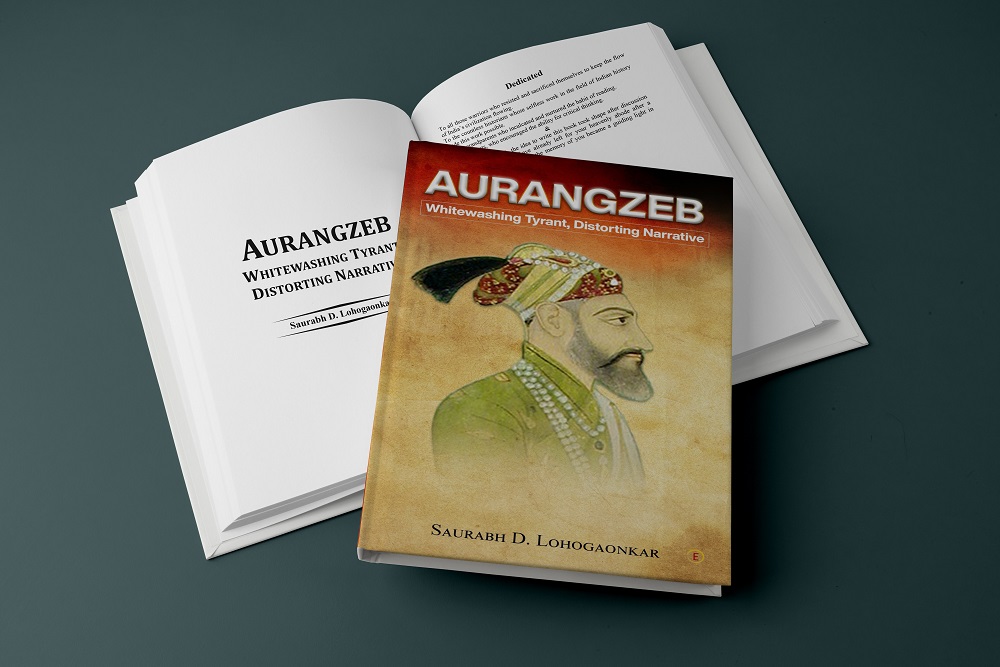 With an evocative book cover that has a side profile of the ruler, the theme and central focus of this book needs no further introduction. The book cover and title are enough to portray the topic that this book deals with. It is a non-fiction about the Mughal ruler Aurangzeb but it is the subtitle “White Washing Tyrant, Distorting Narrative” that catches the attention of the reader and is bound to raise some eyebrows. The book takes readers through the pages of history to uncover and reconstruct the actual figure of a much controversial ruler in Indian Mughal history. The book will be of particular interest to students of history, or readers who enjoy non-fiction and biographies though this book is not a complete biography of any sort.

The book is a rather lengthy read with 23 chapters stretched over 333 pages and delves deep into issues of contention between historians and scholars of Indian history. The main assertion as claimed by the author is that modern revisionists of Indian history have provided a much -distorted view of a tyrannical figure. The book begins with a clear justification of the subtitle of the book as the author explains the angle of focus in this much heated topic. The idea is to re-read and understand not just the figure of Aurangzeb but also reconstruct discourse that surrounds this ruler. The book stands as a fact- finding exercise as the author claims his efforts to be. In doing so, the author presents a counter -narrative that is less favoured and little known. This makes the topic of the book extremely gripping as there are some fresh facts and new contentions made by the author. These are not of course, based on wishful thinking but have their roots in detailed study and hours of painstaking research. Several myths are burst and misconceptions are done away with as the author takes time, through a moderate pace and a highly organised flow of the narrative to discuss and debate, speculate and decipher the figure and reputation of Aurangzeb. It must be noted that the book follows a thinking out loud process and is a bold step towards debatable facts. It is a step forward in the direction of deciphering fact from fiction and the mixing of fact and fiction to create a distorted image of Indian history.

The book is well organised in terms of the flow of subject matter. The arguments are well constructed, flow in a logical fashion and have a context on the basis of which they are being made. This makes the entire reading process really interesting as these are not merely subjective viewpoints of the author but based on concrete facts that have been explored and found by the author after much hard work and detailed research. It is reflected in the facts that are cited and the issues that are raised with the one sided and dominant focus on this historical figure and an important era of Indian history at large. The pace of the narrative is moderate. This does not make it hard for a reader to follow the narrative who is not well acquainted with the subject of Indian history. The detailed debates and discussions make the book highly informative. It is not simple a collection of facts but an argumentative flow of thoughts that discuss certain views and counter them through a logical and detailed manner of thinking. It is the thought process that is sharpened as the reader gets acquainted with counter views and learns to decipher history and historical figures from the perspective of the less known thinkers. This raises speculation surrounding the dominant viewpoints surrounding the figure of Aurangzeb. The subheadings through out the book have an almost poetic charm. For example, ‘Reconstructing The Strike- Deconstructing The Atrocity Narrative’ conveys the purpose of the sub section and guides the reader to look in an alternative perspective, to question, argue and decipher and not to blindly accept anything and everything that comes their way.

The writing style has a poetic charm to it as the sub headings are interspersed with passages that begin and end at a speculation which makes bold claims and fearlessly cuts through dominant narratives to engage in a debate of how much is too much. The idea is to pinpoint the points of distortion. However, it is not a fight against anyone but an attempt to re-read history, to look at inferior contentions and to assess the basis on which they have been made. The book comes with several pie charts and tables that make the arguments easy to visualise and keeps focus on the central issues. The book also comes with a set of appendices that look at the religion and region wise break up of top administrative positions under Aurangzeb and a list of Hindu nobles under the reign of Aurangzeb and the fate they met with.