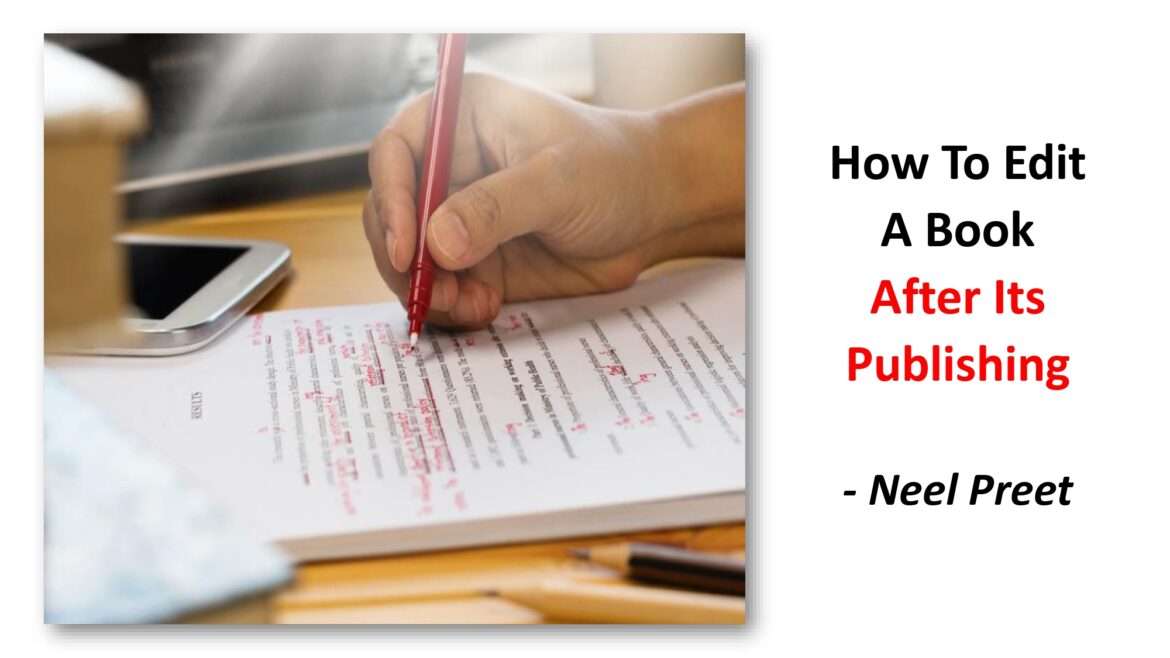 In our past few write-ups, we have covered the importance of editing & proofreading and so far, we have only been considering the editing of a published work before its publication. Well, the good news is that it is very much possible, increasingly so in the age of self publishing and digital publishing to edit your work after publication. While this is more common with some types of writing than the others (non-fiction books on technical topics, for instance, very frequently get new editions) and it is possible for the other types of writings too!

It is also nothing especially new, even if you are a novelist as the writers have been editing their work long after publishing it for centuries. For example, Samual Richardson’s novel Clarissa. It exists in several different editions, the final revision being more than a decade after the original was published in 1747-8. The fun fact over here is that actually Richardson was a printer by trade, which probably made repeatedly editing and republishing his work easier.

Today, the self published authors sometimes edit and republish their novels (particularly early works that may not have been up to the standard of later ones), bloggers frequently revisit and edit posts that have become dated, non-fiction authors put out new editions of their books, and so on. However, if you are traditionally published, then it is going to be a lot trickier to edit your published work!

Well, let us go over ‘5 Good Reasons’ to consider editing your published work –

1) Sales have dwindled: If your book never sold as well as you wanted, then it might be worth taking a hard look at whether it needs a bit more editing. A lack of sales could be down to the price or book description, so it is worth experimenting with those first (as they are the easiest thing to change) and you might also want to explore getting a new cover.

After you have made or at least considered those changes, though, it might be time to edit the book itself. This is particularly true if you have had reader feedback suggesting that your writing was not quite there yet, for example if you have got quite a few low to middling reviews that point out specific flaws. Do not revise your whole book based on a single one-star review, though you cannot please all of the readers all of the time!

2) If the Information gets Dated Quickly: When you are writing about something that changes fast, like technology, a book or article that was totally up-to-date on the day of publication but could be out of date within weeks or even days. Sometimes, you might write about a piece of software or feature that disappears entirely then in these situations it is wise to go for editing and re-publishing.

3) You have grown as a Writer: Do you ever look back on your writing from a few years ago and cringe? Some bloggers update their earlier posts simply because they have become better at writing over the years and they do not feel those pieces reflect as well on them as they would like. The same applies with non-fiction and fiction too!

4) If you want to turn a Stand-Alone Book into a Series: Sometimes, you might publish a piece that is complete in itself only to later realise that you want it to form part of a series. This does not necessarily need to require rewriting but in some cases, it will make sense to rework the first piece in the series to allow more scope for the others.

While there is no requirement that what you write should form a series, many of the self publishing authors are finding that series (of three or more books) are a good way to get readers to buy more than one book. They also lend themselves to ‘Boxsets’ where you group several books into one!

5) Feedback & Reviews: No matter how much editing you do and how many beta readers or editors you have, your published work is never going to be perfect. That is not necessarily a problem at all, as there are hundreds of books that have been loved by the readers, despite them having definite flaws. However, if you feel that the feedback you have had suggests there is still quite a bit of improvement that could be made, then that can be a good reason to revisit a past work. This is especially true if all the criticism is around one general area.

All of the above are perfectly good reasons to want to update something you have already published and if several of those reasons apply to you, then it may well make sense to go back and make some changes!