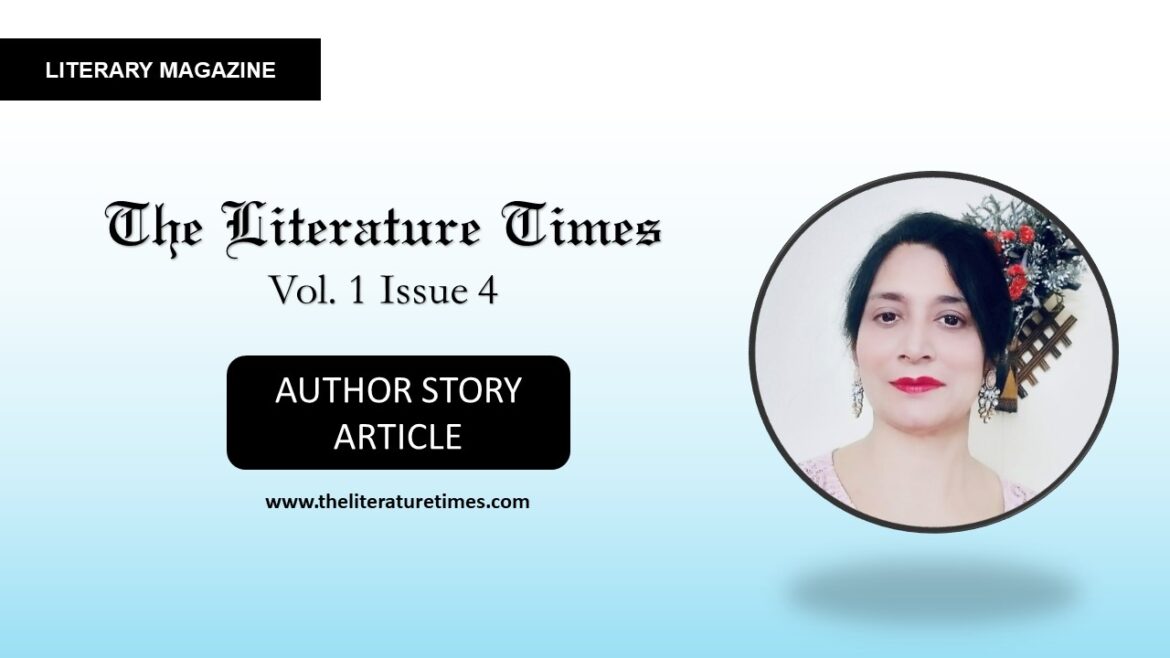 The Literature Times features the internationally celebrated and versatile poet and author Harinder Cheema who is the only Indian to receive the “Naji Naaman Honor Prize for Complete Work in 2022”.

She shares space with other 67 other great world authors including the Prime Minister of Birland. With 3322 participants in the competition, from eighty-two countries, she is the only proud Indian to receive the prestigious Honor Prize for Complete Work in 2022.Released in 2002, Naji Naaman literary prizes are awarded to authors of the most emancipated literary works in content and style, aiming to revive and develop human values.

This is the story of a passionate writer who with her resolve and determination became an internationally celebrated poet and a world author.

Writing is not just a passion with her. It is meditation. She is a change maker as through her writing she conveys the right messages with a strong urge to make a difference. She is the modern day poet and her poetry truly reflects the challenges faced in the present times. Whether it is environmental degradation, or moral depravity in the society, or crimes against women, or people choosing materialism over spirituality, or discrimination and division in the world, her meaningful poetry holds a mirror to the present day world.  Her achievements as mentioned under show her dedication and her love for literature.

Harinder Cheema is the author of two Books, entitled,” The Temple Stop”and ” Soul Chants”, A Collection of Poetic Hymns. Her novel ‘The Temple Stop’ is the recipient of ‘The Best Book of the Year Award 2020’ by Aghaaz, Author In You. She is the co- author of 30 poetry anthologies and her articles have been published in various prestigious International magazines.

Her short stories have been published in the coffee table books and she is also the proud recipient of many prestigious awards including the “Naji Naaman International Literary Prize For Complete Work 2022”, ‘The Author of the Year 2019’ and ‘The Voice of Indian Literature’ by Ne8x, ‘The India Inspirational Women Awards 2020’ and ‘The Women Excellence Award 2020’. Her name finds a mention in ‘101 Influential Women of India 2020. “The Queen Of Era Award 2022” by International Council Of Research and Reforms. Her story has been covered and published by ‘The Crazy Tales’, and she has been felicitated with ‘The Prolific Writer Award’ at the Constitution Club of India. She is also the proud recipient of the Swaavlambika Samman 2021.  Her story has also been featured in “THE LITERATURE TIMES”. Besides, she is a member of AIPC, the only global platform for elite women, and a member of the Screenwriters Association of India.

Her story has been covered by the leading newspapers, magazines and websites. Her INSPIRING STORY has been featured in the INSPIRING WOMEN POWER STORIES in the Women Power Edition of the LIFESTYLE MAGAZINE, March issue 2021 alongside PRIYANKA CHOPRA’S Success story. She shares space with great women of substance like Kiran Bedi, Nita Ambani, and Priyanka Chopra to name a few. She has been featured in the TYCOON magazine which has a global presence. She has also been featured in the ” Pitara Magazine” along with other Women Of Substance.She is also the proud recipient of the National level Pratibha Samman,  Golden Peacock award 2021. She has had the honour of being invited as an esteemed guest at the World Poetry Conference III and the Global Literature Conclave ,2021 and All India Poetess Conference 2021. She is a featured Contemporary World Poet by Poetry And Literature World Vision. She was also an esteemed guest poet at the Panorama International Literature Festival 2022 and Paper Fiber Festival, Mexico 2022. and Senando Mexico 7th edition.

She is also the proud recipient of The Global Environmental Award 2021 and Mother Teresa Global Peace Award 2021. Her name also finds mention in, ” The Pillars of India” and she is the proud member of the Writers Capital Foundation. She has also received the ” International Proud Womania Award 2022″ by Namaste India Group. And is also the proud recipient of The “Best Social Activist Award.” She has also been honored as an ” INTERNATIONAL DECLARATOR ” by the ICD WORLDWIDE NETWORKS on the World Civilization Day.

She has also been honoured with the “International Educationist Award 2021” by Oxford Eduserve. She has also received Literary honours from the Gujarat Sahitya Academy in 2021. She shares space with some great intellectuals in the 21 st century critical thought, a collection of interviews of eminent scholars, poets, thinkers from all across the world, of the 21st century. She has been interviewed by the New York Parrot Literary corner. She is also the proud recipient of “The Tagore Honour 2022” by Literoma and the Rabindranath Tagore Literary Honour commissioned by Motivational Strips in joint association with Cultural department, Government of Seychelles.

She has had an illustrious academic career and her fondness for literature has been instrumental in her having done her Masters in English Literature. Since her childhood she has been into creative writing, dramatics, and Public speaking. As a professional, she has been an educationist, scripted and anchored Air Force events and has been reciting poetry at various forums across the country for the last two decades. She has had the rare privilege of being invited by the Sahitya Academy to recite poetry in their literary forums. She was also an esteemed guest at the Jammu Literary Festival.   Her Poems have been translated to Albanian, Hindi, odia, Malayalam, Bengali languages and is a much respected and revered poetess.

She has also been positively impacting the society through her poetry videos on heart touching subjects. She is a trilingual poet and writes in English, Hindi and Punjabi. She is a motivational speaker and has been invited as a guest of honour by various top colleges and universities of India. She is a dedicated writer, a change maker and an optimist who believes in the motto, “Life is beautiful”.